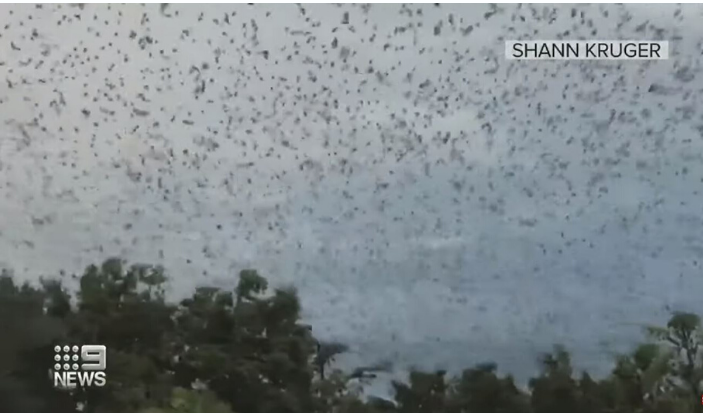 Surreal footage from the city shows a black veil of bats swooping down through the sky.

Residents in one Australian town are dealing with the fright of their lives after thousands of bats descended on them in an incident that is being compared to a "biblical plague."

A veritable "bat tornado" has enveloped Ingham, North Queensland, over the past several weeks as upwards of 300,000 of the winged creatures have settled on the town.

Surreal footage from the city shows a black veil of bats swooping down through the sky.

"There's four different species and because they all have young at different times, there's hardly a window of opportunity when we can interact with these bats to try and move them on."

"It just seems to me that every bat in Australia is now in Ingham ... The problem that we're having is that we're seemingly being influxed by more and more animals and the roost cannot handle it."

While the bats don't pose an immediate danger to residents, they are known to carry a rabies-like disease known as Australian Bat Lyssavirus. The disease has killed three people in Queensland over the past 25 years.

The bats have also brought an excruciating stench, noise, and mess to the town, reports Nine News Australia.

Children at the nearby Ingham State School are too horrified to return to their school because of the frightful number of fruit bats that are on the campus, according to reports.

"They're not stepping a foot in that ground until something is being done."

The Queensland Education Department has pledged to trim the trees surrounding the school and erect new fences to prevent the bats from further encroaching on the school.

Mayor Jayo is concerned that the town is fast arriving at a "crisis point." He explained:

"Where they want to go is basically beside all our critical areas — that includes the schools, the hospital, our kindergartens, our preschools."

Because the animals are a protected species under the Nature Conservation Act, local authorities are left with little recourse to deal with the plague of bats. This comes despite the proven success of using helicopters in 2012 to shift bat colonies out of the region without harming the critters.

However, local politician Bob Katter has boasted that if he had his way, he would "be down here with a shotgun."