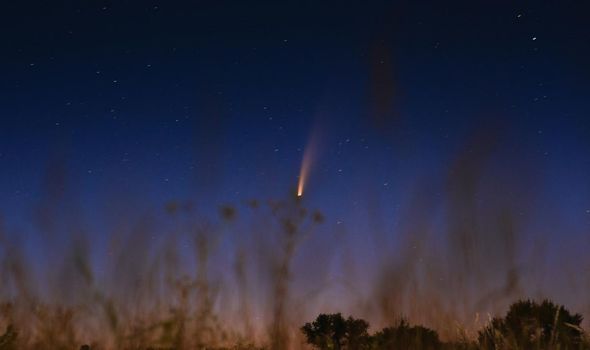 COMET NEOWISE is bidding farewell to Earth, not to be seen again for almost 7,000 years - but one astrophotographer has detailed the comet's passing in stunning detail.

Comet NEOWISE has been mesmerising stargazers across the northern hemisphere as the giant ball of ice produces a stunning gaseous tail visible to Earth. The comet is now barely visible as it moves away from our planet, but one astrophotographer has provided a handy reminder of the comet's visit.

Photographer Dennis Mammana of Borrego Springs, California, created a stunning time-lapse photo of the comet's visit, with an image of NEOWISE on July 18, through to the peak on July 23 to now - where the comet is barely visible - all merged into one photograph.

Mr Mammana said: "I hope everyone got to see Comet NEOWISE during its recent visit.

"It became bright enough to see easily with the unaided eye from dark rural locations but now, unfortunately, has faded into the realm of large binoculars and telescopes.

"I photographed it each night from July 18th to 27th. In this sequence you can see the comet changing its size and brightness as it first approaches Earth and then recedes back into the depths of our solar system, not to return to our neighborhood for nearly 68 centuries." 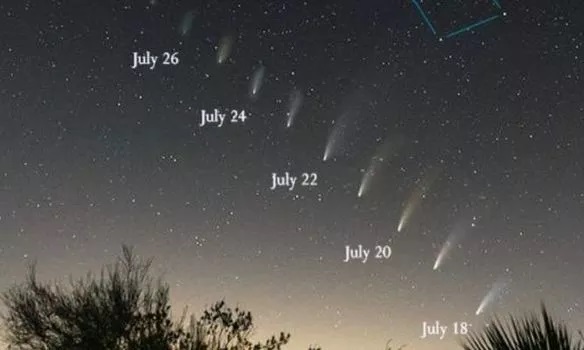 Some scientists have warned Comet NEOWISE could be the last comet which could be visible to the naked eye.

Light pollution is increasingly making it difficult for astronomers and amateur stargazers alike, as artificial lighting is constantly on the increase, a team of researchers say.

According to the Natural History museum, light pollution caused by artificial lighting is increasing by an average of six percent a year.

And as things get lighter here on Earth, the sky at night seemingly gets darker.

Gareth Dorrian, postdoctoral research fellow in Space Science at the University of Birmingham, and Ian Whittaker, senior lecturer in physics from Nottingham Trent University, said everyone should have taken advantage of the comet, the first to be visible from Earth since the 90s, as it could be our last.

The pair wrote in The Conversation: "So comet NEOWISE will only be seen for a few weeks near-Earth while it is near perihelion (its closest approach to the Sun).

"It will then spend thousands of years moving slowly near the other end of its orbit.

"It’s aphelion (farthest point) is estimated at 630 astronomical units (AU), with one AU being the distance between the Earth and the Sun.

"With the constant increase of light pollution in the night sky the observation of comets with the naked eye is becoming much rarer.

"For now, though, NEOWISE presents a fantastic opportunity for millions of people to see a night sky phenomenon which typically only presents itself perhaps once in a decade or more. Enjoy the view!"